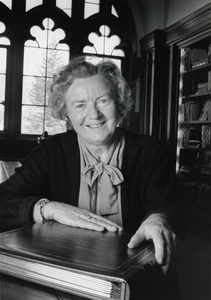 ​Margaret MacCurtain, a Dominican nun, was a Lecturer in Irish History at University College Dublin from 1964 until 1994. In addition to garnering praise for her academic career, she is regarded as an important human rights advocate and a pioneer of women’s history. MacCurtain has lectured extensively throughout North America, and recently presented  the sixth annual Irish Institute of New York lecture. During her tenure as Burns Visiting scholar, MacCurtain contributed to the chronicle of Irish Studies at Boston College by honoring the first curator of the Irish Collections, Helen Landreth, with a tribute to her legacy.

From Dublin to New Orleans: The Journey of Alice and Nora. Cork: Attic Press, 1994.