TML Speaks: Of Equal Worth and Personhood: A Theology of Disability

In this inaugural event of the new biannual speaker series TML Speaks, the Theology and Ministry Library (TML) addresses the experience of disability through story, study, and conversation.

From the moment Brian was born with Down syndrome twenty-seven years ago, his parents have made sure that he has a full life.  They have raised him to be a self-determined young man, and at the same time, they have worked hard to make society a place of inclusion and equity.  In his presentation, Brian will talk about his life in the church – from his baptism and early years in Sunday school and the Christmas pageant, to his participation in the church youth group and its mission trips, to his adult years as a deacon, member of the social action committee, and integral part of the liturgical team.

Brian is the son of Dan (BC '81) and Julie (BC MAT '90 and BC MA '11) Heffernan and has two younger sisters, Maggie and Evie. He graduated from Newton North High School and attended MassBay Community College in Wellesley Hills through its Inclusive Concurrent Enrollment and Transitional Scholars Programs. Brian’s faith life is rooted in his father's Irish Catholic tradition and his mother's Protestant upbringing.  He has always been active in church, serving as a deacon and a member of the Social Action Committee at First Baptist Church of Newton and now as a Eucharistic minister at The Paulist Center in Boston. An award-winning speaker, Brian has shared his personal story with many audiences. He strongly believes that students with special needs should have independence, self-determination, and the freedom to do anything they want to do. His website is http://brianspeaks2u.com/. 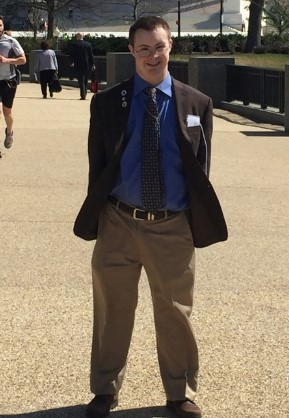