TML Speaks: Of Equal Worth and Personhood: A Theology of Disability

"The Power of the Powerless"

In this inaugural event of the new biannual speaker series TML Speaks, the Theology and Ministry Library (TML) addresses the experience of disability through story, study, and conversation.

The strongest societies are those that protect the weakest citizens. In this presentation, you will hear how a blind, disabled boy with no intellect influenced such prominent people as Henri Nouwen, the President of the United States, the Pope in Rome, Eunice Kennedy-Shriver, and Mister Rogers. You will be reminded of the power of love, the power of compassion, and you will learn about the spiritual power locked inside the broken body of a truly extraordinary citizen: Oliver de Vinck.

After graduating from Columbia University with a doctorate in education, de Vinck, a 40-year veteran of high school teaching and administration, married Rosemarie (celebrating their 41th wedding anniversary this spring) raised three children, and wrote twelve books for Viking, Doubleday, HarperCollins, Crossroad Books, Paulist Press, and Loyola Press. De Vinck’s essays have been widely published in The New York Times, The Chicago Tribune, The Wall Street Journal, and he is a national spokesperson for the disabled and the power of the powerless. 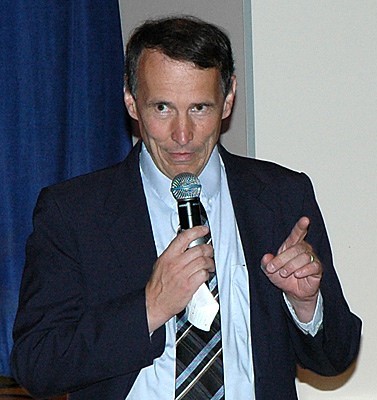