Until scholars started blogging, the general reading public had very little access to the conversations of scholars, which are breeding grounds for many of the major ideas that eventually become groundbreaking research studies, articles, and books. These conversations happen at conferences during presentations, but also over coffee or beer near the conference sites, or in department offices, labs, and local hangouts. With blogs, scholars get a chance to let a broader public get a glimpse of ideas as they form, and see how scholars test things out in an environment more open and forgiving (sometimes) than a professional presentation or publication. Blogs also allow scholars a venue for educating a broader public, especially on topics that are misunderstood or misrepresented in the popular press.

Compared to traditional academic journals, which have existed for over 200 years, blogs are still relatively new, which means that only a few blogs are beginning to be included in article databases.

CAUTION: Check with your instructor: he or she may be aware of certain blogs that are highly regarded in the field.  He or she may also simply rule out blogs as sources, since the task of evaluating their authoritativeness and bias may be beyond the scope of the course.

It can be difficult to locate authoritative blogs. Here are some starting points:

After you've run a search in Nexis Uni, go the limiters in the left-hand column. Under "Publication Type" click "Blogs." You'll then see a list of blog titles aggregated by Newstex. 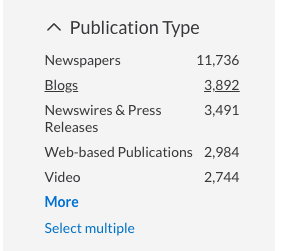 Here is a sample of current blog entries from scientopia.org: